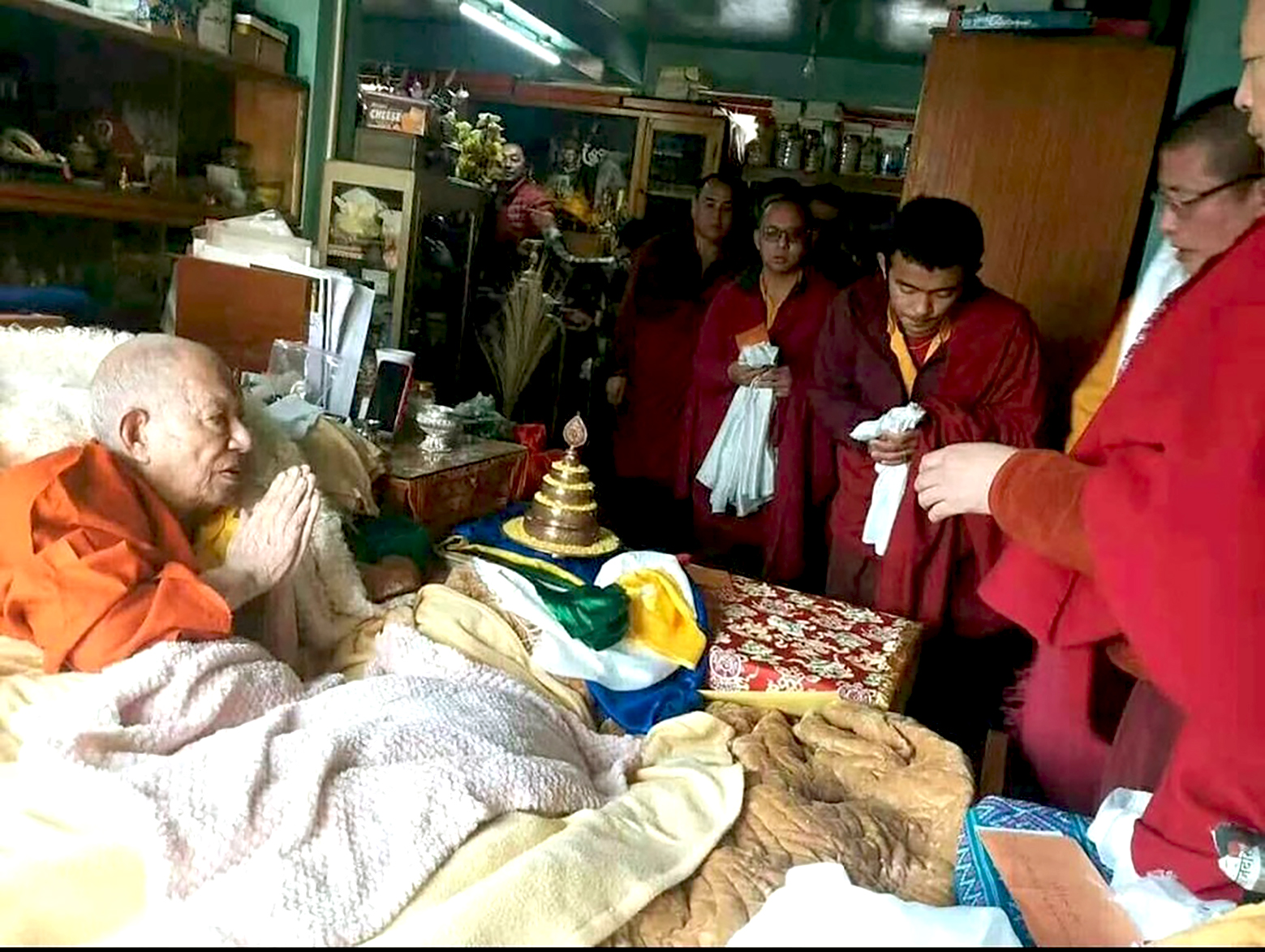 This is a compilation of resources for practices which have been recommended by close lineage gurus
to avert the current epidemic. The brief version of this can be found here:
There are various aspects addressed by all practices equally:
1. perceptions/emotions accompanying the real or expected spread of disease like fear and panic
2. danger of infection
3. obstacles and harm arising from 1 and 2 combined
Which practice is best to do? (in order of importance)
1. the one recommended to you by the master whom you have samaya with
2. the practice for which you have received lung
3. practices you may already be doing for some time
4. practices you feel greatest connection with
Of course, you can do all of them together.
There are the following practices included:
1. Prayer by the Mahasiddha Thangthong Gyalpo who is renowned for having cured epidemics
including unknown diseases many times. Lung by Kyabgon Gongma Trichen Rinpoche
Thangthong Gyalpo was born in West Tibet near the holy mountain Chung Riwoche where the
Northern Treasures were propagated and near the Yarlung Tsangpo river. He was the emanation of
Padmasambhava and wrathful Avalokiteshvara, Hayagriva, combined in order to tame human and
non-human beings, wrathful spirits and guardians. He met all the siddhas of India, traveled to Nepal
and India for 18 years, and afterwards became a siddha.
2. Prayer and mantra of Tara Parṇaśavarī by Dzongsar Jamyang Khyentse Rinpoche (including his
lung). Parnashavari (Sanskrit), Lomagyuma in Tibetan, is the mountain hermitess who dispels
ignorance and protects from disease (in particular those of a contagious nature).
She is also identified as the 20 th of the twenty-one Taras, who is specialised in the prevention and cure
of sickness thanks to her knowledge regarding the natural healing powers of herbs. She wears a skirt
of forest leaves and in one hand she holds the stem of a medicinal plant; she is both peaceful and
wrathful at the same time. Parnashavari belongs to the Karma Action Family of Buddha
Amoghasiddhi, emphasising the swift performance of the enlightened activities of the buddhas.
3. Dorje Gotrab mantra (‘The Vajra Armour mantra’),
a terma of Guru Rinpoche that is especially effective in protecting against all kinds of disease and
epidemic with lung by Dzogchen Ranyak Patrul Rinpoche
4. There is an easy to print protection chakra against disease
Helping others who are not practitioners or Buddhists?
I personally believe that if you play the mantra to people who are infected or are seriously ill that it will
definitely benefit them, in the same way placing the protection chakra in shared spaces will fortify the
space.
Should you have received the lung and have done a proper recitation (minimum 3 days in complete
silence) of the Dorje Gotrab mantra you then can also make healing water imbued with the power of
the mantra to protect yourself and others. You can drink the mantra water and/or spray it.
Please, share the file contents freely with dharma practitioners. However, always send the source and explanation at the same time.
May it benefit all.

Dorje Gotrap–The Mantra of Indestructible Armour i
OM PADMA SHAVARI PHAT | NÄN PAR SHIG | NAGA NÄN | TADYATHA |
SARVA | BIRITA | HANA HANA | VAJRA NA | RAKSHA RAKSHA | SVAHA
During Guru Rinpoche’s time, King Trisong Detsen was the king of Tibet. It was a
degenerate time with many obstructions from beings, evil spirits, circumstances and
negative forces, so King Trisong Detsen requested from Guru Rinpoche a mantra for
healing.
Guru Rinpoche spoke to King Trisong Deutsen saying, “Very compassionate and great
king, listen to me! In five hundred years’ time there will be less merit and bad conduct.
There will be less rain, less water, poor harvests, and the four elements will be
disturbed. ‘Dons’, [demons known for causing disease and creating mischief for
humans] from the upper region, the nether world and the middle region, and the
elemental spirits will bring about dreadful diseases such as leprosy and other diseases
that have no name.
Great doctors will not be able to recognize these diseases and even excellent medicines
will not be able to cure them. Furthermore, the medicine will become negative and
great practice will not help but actually go amiss. Thus this time will be a time of very
bad circumstances.”
King Trisong Detsen then paid respects to Guru Rinpoche and said, “Oh great Maha
Guru, please give me a powerful ‘mengak’, a transmission and a method.”
Guru Rinpoche spoke, “First the power of the mantra, then the power of the substance
and the power of the medicine. This great mantra is called ‘Dorje Gotrap’ the mantra of
Indestructible Armour. Please follow this and stick with this. Doing the mantra for three
days as a retreat is enough and then the best is to continue to do it one hundred times a
day, middling is twenty times and the least is to do it seven times a day.
For this mengak there is nothing to focus, nothing to visualize, nothing to protect, and
no commitments to keep. Thus this is the great mantra.”
i
This text and lung was given first in 1997 or 1998 (?) by Dzogchen Rinpoche in Sydney during a bird flu
epidemic. 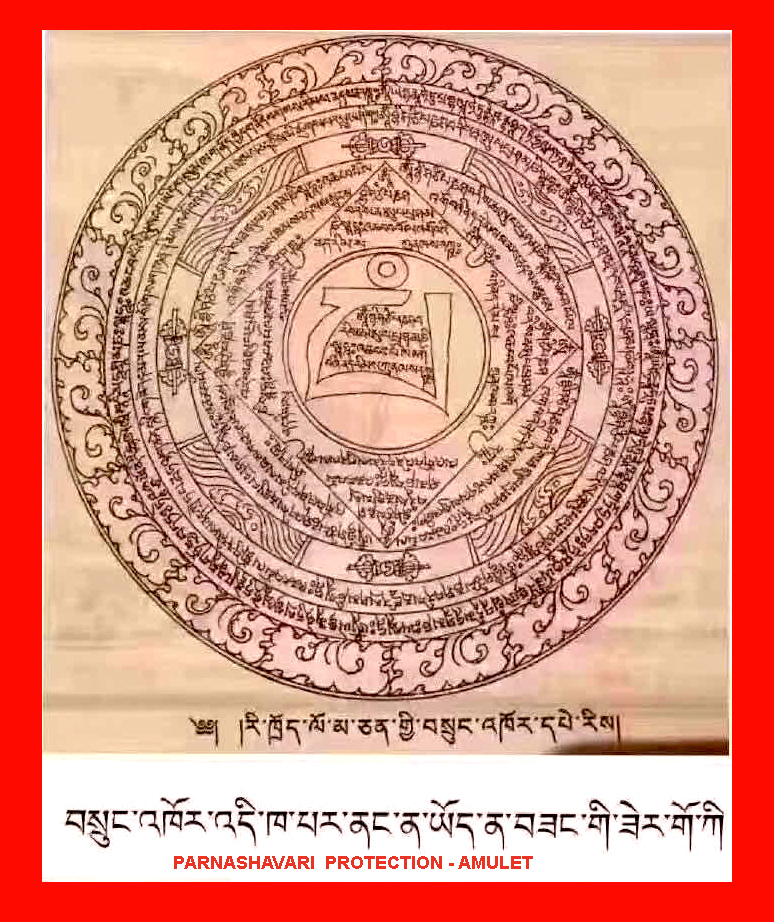 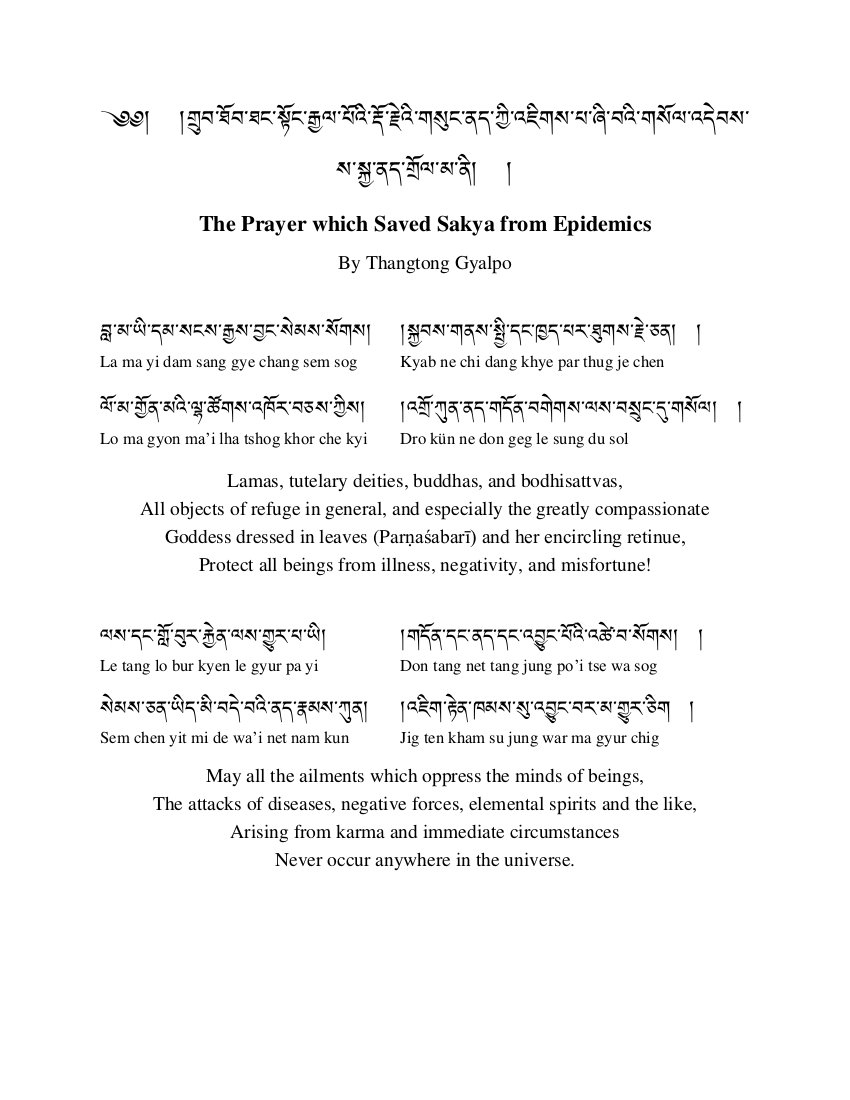 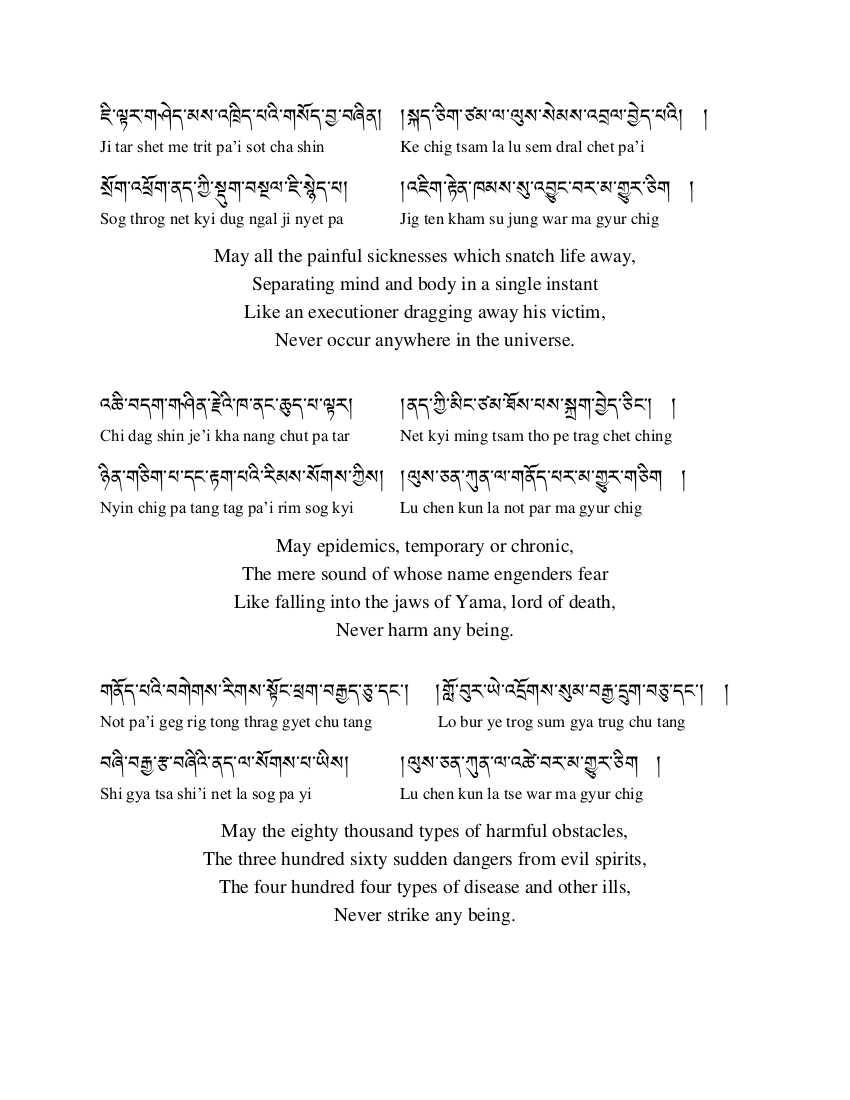 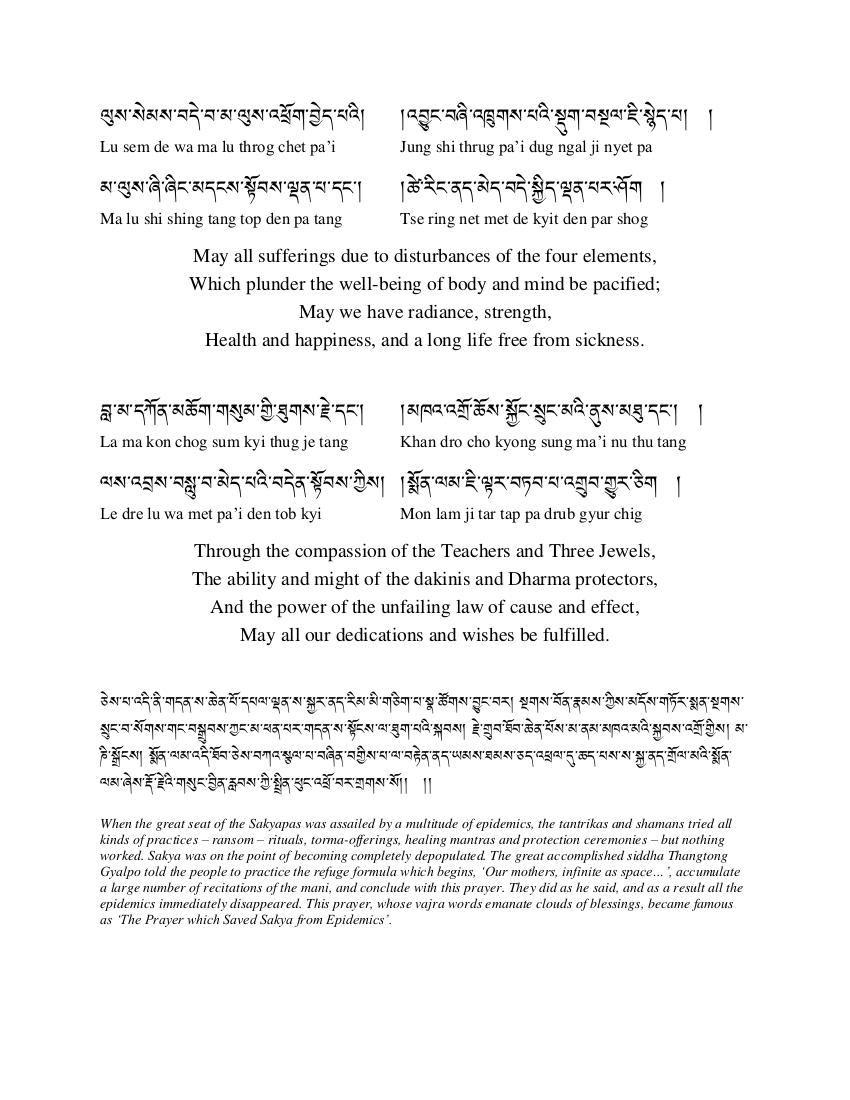 Coronavirus Is Bad Enough – Why Have Fear as Well?

It seems as if there’s nowhere on the planet right now that isn’t suffering from the presence of the coronavirus and its consequences. And it’s bringing so much fear and anxiety.

This is natural, of course – but that doesn’t mean we should take fear for granted. We shouldn’t fall into the trap of believing that because fear is natural we can’t change it. Of course we can! That’s the fundamental point that Buddha makes: that’s the essence of his teachings and practice. Our mind is not set in stone. We can change it.

“Mind” here doesn’t mean something like the brain. That’s not Buddha’s expertise. His expertise, Buddhist psychology, is all about the actual subjective cognitive process itself, our myriad thoughts and feelings and emotions.

If we can change what’s in our mind, obviously the first step is to become intimately familiar with what’s in there. As we know, according to the Buddhist analysis, essentially the contents of our mental consciousness – all those thoughts and feelings and emotions – are neatly divided into three categories.

1. All the I-based emotions that we know so well: the neurotic, deluded, disturbing states of mind such as attachment, anger, jealousy, low self-esteem, and the rest, which limit us, cut us off from others, overwhelm us, and cause us to suffer, and, eventually, to harm others.

2. All the productive, non-I based emotions that we also know so well: such as love, kindness, patience, forgiveness, self-confidence and the rest, which open us up, are the source of our own happiness and sanity and our ability to be of benefit to others.

3. The third lot I like to refer to as the mechanics of our mind: parts that we need in order to function: whether you’re a murderer or a meditator, you need concentration, attention, intention, discrimination, mindfulness (which is essentially is short-term memory. As Lama Zopa Rinpoche says, “Thieves need mindfulness!”)

So, where does “fear” fit into all this? Interestingly, it has no status of its own in the list of neurotic states of mind – simply because fear is the flavor, the character, the energy, the very nature of all of them. They’re rooted in fear! They are the voices of the main delusion, the main fantasy, the primordial grasping at a separate, concrete, set-in-stone “me.”

In relation to coronavirus, the two main delusions at play are attachment and aversion, plus the grasping at things as permanent, unchanging.

The millisecond attachment doesn’t get what it wants – and it certainly doesn’t want coronavirus or anything to do with it! – aversion arises, and depending on our personality that can manifest as anger, upset, irritation, even despair and depression.

Mixed in with this is the assumption that the nice things shouldn’t change, won’t change – how dare they change! We just can’t stand the thought of those nice things, our comfort zone, being disturbed, so we add another layer of nonsense, another fantasy: we believe, we assume, that the status quo is permanent, unchanging.

All this leads to, comes down to, subsumes in – fear!

In other words, having these primordial neuroses, at the level of assumption – attachment, aversion, grasping at things as unchanging – we set ourselves up for suffering: panic, anxiety, fear. That’s it.

And fear makes everything worse! Bad enough that bad things happen, why be fearful as well? It grinds us to a halt. We can’t accomplish anything, we can’t function, we can’t see past our own nose.

What to do? Change our assumptions, dig deep down, identify the elaborate conceptual stories that underpin our attachment and aversion and grasping at unchangingness, and learn to argue with them, not believe them, not buy into them.

Of course it’s hard! But we can do it. We can be brave. Opening ourselves to the reality of the bad things, the things attachment doesn’t want, calms us down, steadies us, makes us more reasonable, more sensible – less fearful.

Then we can realize we’re all in the same boat and we’ll have compassion for others as well.

One step at a time!